The Archive for Legal Philosophy and Sociology of Law, inaugurated by Professor Zheng Yongliu in 1998, publishes on Legal Philosophy and Legal Sociology. To date, fifteen volumes have been published. Serving as a forum for the publication of work in this area, it aims to facilitate the observation of and reflection on Chinese problems, taking both a transcendental and a practical approach.

The Archive has sections on legal philosophy, legal sociology, and the Jimen Forum. The column on the Jimen Forum contains information on the latest discussions and contributions. Each volume also contains a symposium on a theoretically significant topic, including discussions, essays or translations.

The Archive is published in Chinese, English and German. The Archive has published contributions by distinguished legal scholars such as professor Jürgen Harbermas, Robert Alexy and Ulfrid Neumann. The theoretical value of the Archive helps it to play an influential role in Chinese academia. Institutions such as the Public Law Institute of Heidelberg University and the Swiss Institute of Comparative Law are subscribers and use the Archive as a tool to understand the state of legal research in China. 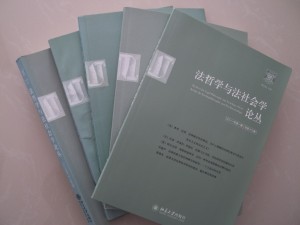